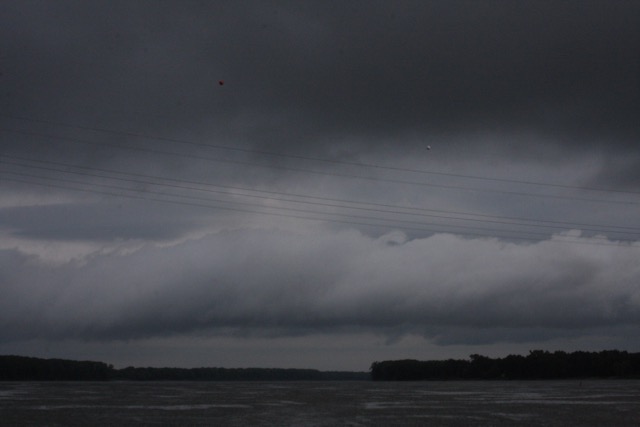 Note: our trip is officially over for the summer, but we will continue next summer and we will  update our blog regularly in the interim–there’s lots to say about our journey that hasn’t been said!

Earlier this week I read a headline in the local newspaper for the area around Hannibal, MO: Solar Eclipse Disappoints Locals. A few pages away there was a piece on our journey with pictures of Morgan, our roadcrew Aaron and I beaming from the interior of Michi Zeebee. The same reporter wrote both articles—we met him in a Starbuck’s in Quincy, IL when we edged in on his table in search of an outlet to charge our VHF radio. He struck up a conversation by asking if we had a radio show, and eventually revealed to us that he was supposed to cover the eclipse at a hen house—his editor wanted to know if the birds would roost in the artificial night. He would spend the epic national moment with a bunch of birds. We thought we might tag along, but fate and the weather took us other places.

There are a lot of things you can do on a house boat during a total solar eclipse: aside from packing as many people onto the roof as possible, filling up the fore and aft deck with more live bodies, and squeezing even more people into the cabin space with barely enough room to crane their necks out the dropped-down gun port windows at the heavens, fully boozed, drunk on music, and glammed out in shiny eighties cyborg glasses (this would all be a terrible idea and probably end up with a local newspaper article headline Shanty Barge Party Sinks to Bottom of Mississippi, Locals Disappointed); we could have turned the whole structure into a giant pinhole camera in the style of photographer Vera Lutter, who has lived for extended periods of time in tiny homes with emulsion-covered walls; or we could have sneakily set off fireworks from our hydroponic PVC tubes to light up the brief darkness at the moment of totality with a shower of Moon Bombs and Whirly Zees. We could have at least bought some heavy duty UV-blocking glasses and gazed upwards, adrift on the momentarily peaceful Mississippi. But there was no packed boat; there was no dancing; there was no singing; there were no seances with hens; there was no mindful drifting. We were just too tired.

That morning I got up after one of the worst nights of sleep in recent memory, filled with death-defying snores, train blasts, ringing phones, and intermittent blasts of light. It was almost as bad as a night at the very beginning of the trip, wrapped in a mosquito net that hadn’t been set up completely so the bugs were still biting through the veil; I was sandwiched between two bodies in a sweltering heat, fighting dry throat and staring at a jug of water just out of reach, because I couldn’t move without tearing the mosquito net off of the rest of the people sleeping under it and exposing everyone to the swarming terror outside.

Despite the inebriation from lack of sleep, I attempted to expand myself from the soul-crumpling dust bin I’d tossed and turned in all night, but I didn’t have any coffee to assist, so I didn’t feel like talking or doing much of anything. The VHF gently broke the day with news of a forty percent chance of rain and winds from the south around ten miles, a forecast that basically amounts to a big shrug: maybe all will be fair enough and the skies will keep themselves bottled, or maybe you’ll get knocked around Pepin-style with an added hit of lightning and hail. This made it tough to decide whether to push on or not.

More factors to weigh: We were tied up to a city dock which was barely big enough for our boat and sketchy enough that we didn’t feel comfortable leaving the boat unattended, so we wouldn’t be able to get around during the eclipse; the only marina in town was cost prohibitive, despite the fact that it had hole-spinning spiders under its toilet seats and frogs copulating in its shower; and there were no convenient anchor spots good enough for the serious storms we heard forecast farther out. As I painfully splashed water on my face weighing these factors, the chances of thunder storms dropped from forty to thirty percent, so we decided to move from our dock despite the noncommittal initial forecast.

The sky darkened as the day began to take form. Clouds occluded above our wake, in a long low line, as if the carpet was being rolled up behind us, and the wind kicked the water to chop until we passed through lock 21, where the lock master was really nice but also warned us to be careful in an ominously cinematic way. As the lock doors shut behind us, I turned around to see the white carpet had spread out into a dark low-lying blanket overtaking us from the northern horizon. A starkly white cumulonimbus overhead appeared. Factory smoke on the right descending bank looked hard as snow and rolled that way too as the sun temporarily showed itself, soon disappearing, turning the water silver. Silver almost always precedes a storm. Chances of thunder storms moved back up to forty percent. Morgan was unusually quiet. I just grunted and nodded when she gave me mile estimates and warnings about oncoming barges. I notched up the motor as much as I could without making things rattle around. No one else was out on the water, maybe a few diehard fishermen and work boats.

The wind appeared to suddenly and completely die, but the water was still choppy, so I knew the air was still moving; we were just traveling at exactly the same speed as the wind so we couldn’t feel it. I couldn’t even discern a whisper on my skin. We moved through the uncanny stillness.

We pulled into Hannibal, MO, almost twenty miles later, in record time. Aaron appeared from alternate time dimension, out of his car, and said that it had rained in Quincy. The sky almost immediately opened over us. It was one of those gorgeous confused rains, where the weather can’t make up its mind between black and gold, and it feels like everyone should be dancing, except that I was zombified, ill from lack of sleep.

On the cusp of the storm, we piled into Aaron’s car to continue south, moving from one form of storm-fleeing locomotion to another. In the afternoon we stopped at a gas station located in a national band of near totality, still cresting the wall of clouds behind us; people were already looking up, asking one another where they got their glasses, squinting sunward with one eye bare as they put gasoline in their vehicles. A woman lent us her eye protection. I glanced through to see a bite taken out of a glowing orb. At fifty percent totality, we arrived in Louisiana, MO where the owner of a hardware store, which was out of both glasses and welding helmets, let us use his eye protection. The bite was getting bigger.

Near totality we found ourselves at a lookout over the Mississippi using our digital—not pinhole—cameras to watch the sun subsumed. I used a lens from my eye-ware as a makeshift filter for my camera lens, and blindly shot the glowing star above. I saw totality approach delayed by the amount of time it took to snap a picture and look at it. A giant rainbow arced all the way around our view of the center of our universe, a rare sight, almost as rare as the eclipse. I blocked the sun itself and stared at its multi-colored halo. At 95%, the maximum shadow we’d see, the day darkened; crickets came out and the automated bridge lights on the Mississippi lit up. A man walked by carrying his crying three-year-old under his arm like a burlap sack. The world’s Instagram feeds filled with a shared event. The air shifted; it felt as still as the moment earlier in the day when I realized our boat and the wind were traveling at the same speed. Then it was over and we heard car doors slumming, engines starting up; the river overlook cleared out. The Mississippi was left alone again.

Driving home we took back roads to a wildlife preserve. We drove through the line of the storm we’d been dodging all day. The sky didn’t just open, it cracked like a dam sabotaged with dynamite, lightening from horizon to horizon and so much water that within seconds it swept away the thickly encrusted dirt from the rear window of Aaron’s Yaris, along with a face that had been playfully etched into it.

At a pool hall later that night, we were all out with our reporter again. He told us that the chickens did not roost.

–Emily, writing from a chocolate and coffee shop in St. Louis