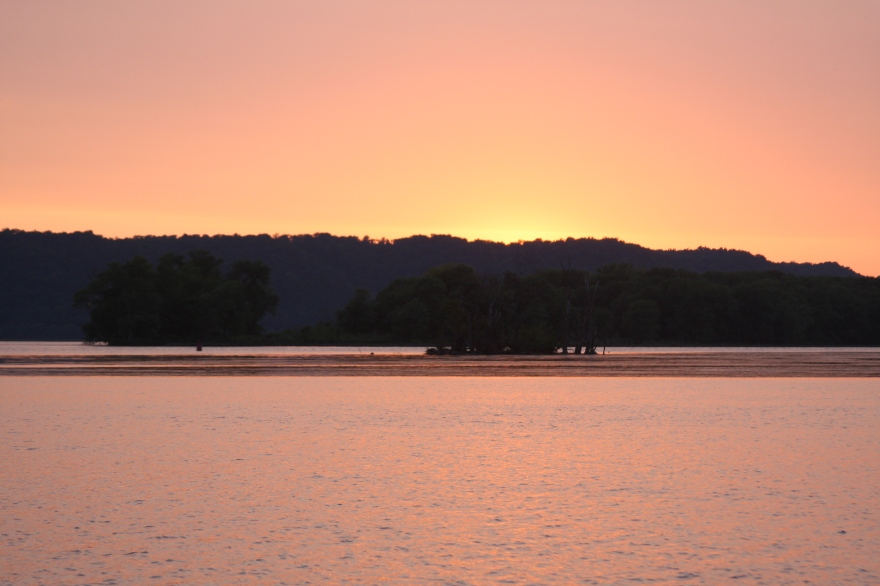 We were bright as a firefly on Lake Winneshiek with our running lights and every solar lamp we could muster up on Michi Zeebee. This was our first time anchoring at night and it wasn’t exactly planned. A marina that was supposed to be there wasn’t really. Well it was sort of, but the only way to access it was through a low bridge that only a small fishing boat could fit through. There we were with nowhere to tie up and the sun going down.

For days we had been discussing about the possibility of anchoring somewhere for the night. How great it would be to fall asleep and wake up on the water with only the fish and birds keeping us company. Still though we wanted more practice anchoring as you can drift if you don’t do it properly and sometimes even when you do. Luckily since we had been thinking about it for days I had planned several potential safe spots to anchor if we felt up to it. With the sun going down and barges on their way we felt up to it.

Earlier that day I had marked two spots on either side of the channel by Lynxville, Wisconsin. One was the St. Paul Slough, which had several wing dams, islands, and stump forests. It was tricky to get to the spot, which made it desirable because how the heck would a barge make it over all these obstacles. On the other side was Lake Winneshiek. It was deeper and had fewer obstacles, but was still protected by stump fields. Surely barges would not be able to make it over these.

Since it was our first time anchoring for the night we wanted to have as many booby traps for the barges as possible so we headed over to St. Paul Slough. Bad idea! Even though we were following the map closely, the river constantly changes so our razor edge path that we were cruising over turned into two feet of depth with tons of sludge. The motor started coughing and Emily’s eyes got wide. I tested the ground with the pole. This was well protected all right – we couldn’t even get through. Somehow we were able to back out of this thankfully and head over to spot number two.

We puttered over to the designated spot. Now since this was less protected we decided we should have two anchors. However, our aluminum Danforth anchor didn’t have a heavy chain so it wouldn’t catch. We tried a couple of times. Nothing. I looked over at Emily with a ‘well this isn’t great’ look, but decided one anchor would do. Emily confirmed that we could do this with one anchor, but would need to check for drift. I dropped our heavy iron anchor and counted the number of arm lengths of rope that went into the water then times that by 5, let that out, cleat it to the boat, back up the boat, make sure it is tight, and then pull her in a little and recleat. Emily looked around for points of reference to gage if we were drifting. It looked good.

As the sun set we started to ask ourselves “is it possible for a barge to come here? Would they by chance?” Followed with, “no, we haven’t seen a barge deviate from the channel once, plus there are these stump fields.” I saw from the Marine traffic app that a barge was coming our way. There was only one way to find out the answer to this question. We put up every source of light possible around Michi Zeebee so we would be visible. Emily climbed to the top of Zeebee and I sat on the ladder to watch the sunset and the barge in the distance heading in our direction. Here was our test. I watched the silent behemoth lumber our way, ready to pull up anchor and start the engine if need be.

At first it looked like it was coming straight for us and it was, but we were waiting for it to make its turn. I held my breath, I think Emily did too because we were both dead silent. Seconds passed by though it seemed like forever. It turned. Obviously it turned because I am writing this. I knew it would, but still. What a relief! We started cat calling the barge. As our whistles dissipated into the night we both climbed back down to get ready for bed.

I slept soundly the rest of the night after our moment of triumph. Lies. I woke up every hour to make sure we weren’t drifting and about to hit a barge. I had set an alarm every hour and or so, but would wake up 10 minutes before each alarm. My body was ready to jump into action because you know I could totally take on a barge. Emily kept waking up too every time the train passed by thinking it was a barge about to run us over. It didn’t help that when a barge would pass they would shine their spotlight on us. We never did once drift. That anchoring job was solid and it sure was a beautiful morning waking up on the water even if we were a bit bleary-eyed. 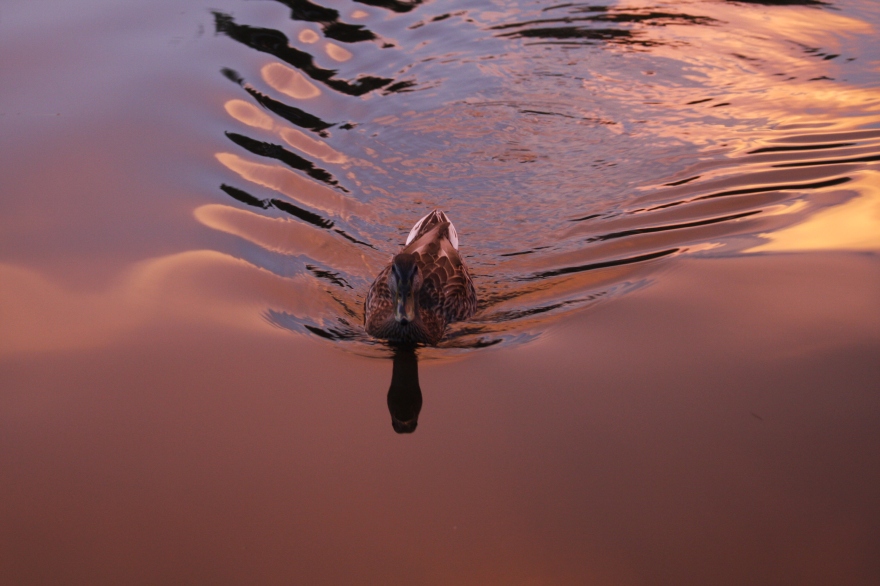 3 thoughts on “Dear Anchor, Please Don’t Let Us Drift into the Channel”