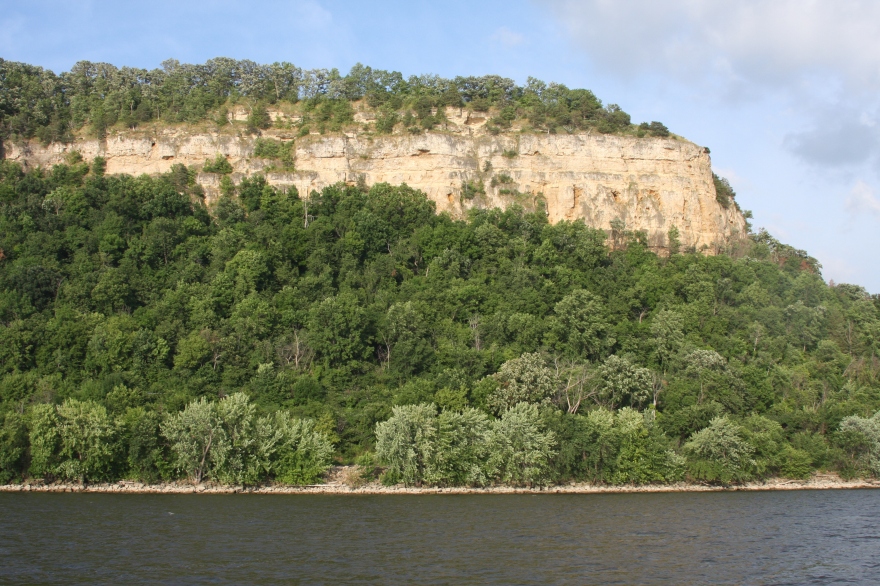 Morgan first heard about Lake Pepin from a tugboat captain who worked on the river all his life (this was not mentioned in our post “Words of Advice,” but it really should have been). He told her she should just get a boat to tow Zeebee across Pepin. We also read about the lake on various Mississippi blogs. It was often mentioned as the “most dangerous part of the Upper Mississippi” or “no joke.” This is why we spent much of yesterday docked and hanging out for another night at Muddy Waters getting free dinner and drinks with Jim Toner and his buddy Joey and all the nice people of Prescott, Wisconsin. My friend Rebecca, who was visiting from Nebraska and who keeps popping up at the places we dock after having her own land-based adventures, joined us again as we waited out the tornado warnings with conversation, even though there were no tornadoes, and as we waited out the hail warnings, even though there were clear blue and pink skies. The next morning we felt pretty confident about the forecast. I saw a low-lying cumuloniumbus on the horizon but shrugged it off. I figured it was yesterday’s storm clearing. Also — mistake #2: we didn’t gas up before heading out. And we were a day behind and trying to make up time.

About halfway across Pepin, where the waves were just starting to whitecap, we found ourselves almost on E trying to round a strip of land to get to calmer, shallower waters and drop anchor to gas up. Twenty minutes later, gas full and anchor up, I turned the key in the ignition just as the barge George King rounded the corner behind us, and nothing happened. The motor didn’t start. Not even a cough or a sputter, and we were drifting into the channel. Morgan radioed King “we’re dead in the water on your port side and drifting” and King sputtered something back that seemed like “copy.” The barge was moving slowly so I ran around squeezing the gas uptake, checking the lines, unscrewing wingnuts from the battery to check the connection, doing all the obvious things I remembered from my days of owning cars that broke down regularly in the hope that tinkering would reveal an obvious answer to our problem; nothing did. Remembering her experiences with motorcycles, Morgan thought the engine could be flooded, so, drifting ever closer to the King, we re-anchored, emptied gasoline from the tank, gunned Zeebee in neutral, turned the key, and she came to life just as King passed us in the channel. We turned to take her wake. Some small disaster averted, but all this meant that we lost an hour and the goal was to cross the whole lake in one go, not only for the sake of making our next stop on time but also because we didn’t want to have to anchor in a potentially dangerous area. So we pushed on with the night falling.

For a stretch the water was nothing but beautiful. Lake Pepin was surrounded by hills that alternated from chiseled, shining slabs of what looked like light brown clay and thickly forested, lush greenery that continued right to the water, where massive pieces of driftwood bore their root systems skyward. Some places, where a single tree stood on an outcropping of rocks backed by pastel shades, looked tropical, and others, where the hills billowed and crested with lines of naturally manicured trees, seemed Mediterranean. In the distance we saw boats with their sails full. As we pushed on with the motor blatting I wished we also had a sail.

When we neared the other side of the lake the light dropped from clear to gold, and the wind picked up so that by the time we were almost across there were 60% whitecaps. The wind was North-west, meaning it was at our backs, but if it had been coming straight for us our hull would have been pounded. Even so, I could see Zeebee rising and dipping more than I ever expected our small raft to rise and fall. Morgan said she was plastered to the front of the boat as the bow dove into each successive trough, holding on and waiting for the Big Wave that would take her out. She later said she heard me singing above as I captained and that’s when she knew things were getting hairy. They were. We moved some cargo to the aft to raise the bow so it wouldn’t duck under, and to put the propeller further in the water because it was popping up on some waves.

Earlier in the day we had to pass a barge and another oncoming houseboat in a very narrow stretch of the Mississippi with an wing dams on one side and shallow water on the other—we took Zeebee out of the channel and just bounced back and forth between two wing dams as the traffic passed us—and that felt like an obstacle overcome, but the increasingly darkening and deepening waters on the border of Pepin made me all but forget that incident.

We eventually spotted a marina where we could take shelter, but getting beyond the breakwater that protected it and into its narrow entrance, where a sailboat and a motor boat were exiting, seemed all but impossible. Still, I couldn’t stop. We would completely lose control of our steering, and then either drift onto the breakwater, which was nearby, the marina entrance, which was also nearby, or another boat. As I turned the boat portside the wind was no longer at our backs; it was pushing us sideways, so I turned in at an angle to maintain some control, but still we shot into the harbor where all the yachts were neatly docked. As we entered the marina Morgan put out fenders on both port and starboard just in case. I spotted the first free space that was out of the wind, reduced speed a little, kept the dock at an angle to portside, and went for it. It was a hot landing, but not so hot that it burned the side of the boat or any other boat for that matter. Morgan hopped out with a dock line and hooked it around a cleat and I cut the engine. We guided her in with lines next to another houseboat. We later found out that the wind was at 10-13 knots as we entered the marina, a litte higher than the forecast predicted and a little higher than Zeebee should take.

(Apologies for the late post — this all took place July 12 and was written up this morning — we spent the few hours after this ordeal toasting to the fact that we made it, not exactly in the most graceful manner but still with Zeebee in one piece.)